A note about the first two blogs on this site:

The first two blogs posted on this site were originally posted on my other site "Glebe Homie".

The title of the 2nd blog which is now untitled, was actually: "...I needed a medicinal Nature encounter..."

That having been said:

If you decide use HTML in Blogger, once you post you cannot with out long, frustrating, hair-pulling, hours upon hours of back-door end-run rewriting and reposting, corrections are almost imposable.

I tried when reposting these blogs to make corrections that I was unable to deal with when they were originally posted. Most real problems have been fixed. However some inconsistencies still exist and I apologize for this most humbly.

Believe me, I could fix them any better I would. For now, I feel that I have invested enough time and effort, so I now hereby surrender those mistakes and inconsistencies to the inertia of the transitory.

ON WITH THE SHOW!

How about one more geezer level?
geezer laying on his back holding a lily.

Markle, I am so imressed with this blog. It is beautifully done and your writing is such fun. Love the geezer, love the photos.
Olliesmom 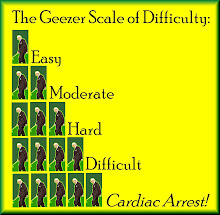